Industrie 4.0 – From Vision to Reality 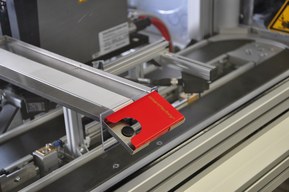 The SmartFactoryKL is a manufacturer-independent demonstration and research platform and unique in Europe. Here, innovative information and communications technologies and their application are tested and developed in a realistic, industrial production environment. We aim to integrate sophisticated information technologies into factory automation. The devices and applications of consumer electronics that are already part of everyday life, e.g., tablet PCs,

smartphones, navigation devices and wireless communication systems, will enrich the traditional working methods in industry and open the way for more flexible and efficient concepts in the future factory operation.

Together with partners the Smart-Factory KL e.V. developed an innovative production line and impressively realizes the practical applications of the crucial aspects of INDUSTRIE 4.0.

Short description of our contribution

The LAPP module Quality Control performs two different tasks: the final inspection of the product using a high-resolution camera, and the commissioning of the finished business card holder. According to the vision of INDUSTRIE 4.0, the module was realized with a focus on a complete networking with Industrial Ethernet.

Our implementation of INDUSTRIE 4.0

The LAPP module Quality Control aims to perform the final inspection and the commissioning. Quality is controlled by using a high-resolution camera, which reviews the correct assembling of the produced business card holder via contour recognition. The result of quality control is stored on the product RFID tag. A twin axle “pick and place” unit is responsible for the separation of good/bad parts and the issuance of the finished product to the visitor.

According to the vision of INDUSTRIE 4.0, the module was realized with a complete networking with Industrial Ethernet. The connection up to the sensor / actor level presented an especially challenging problem because of the high robustness requirements regarding cables and connecting systems, and was successfully implemented with the LAPP module.

As a solution provider of cabling and connecting systems for industrial automation technologies, it is very important for LAPP to understand the product environment in which

our products are and where they might be applied in the future. For this reason, we pay close attention to INDUSTRIE 4.0 and are involved in the technology initiative Smart-Factory KL e.V. The manufacturer-independent initiative clearly points out the benefits of using modern information technology in production environments. Manufactures like LAPP have the opportunity to develop and test new solutions for future mechanical engineering in the SmartFactoryKL. LAPP already offers complete solutions for all connections in smart factories.